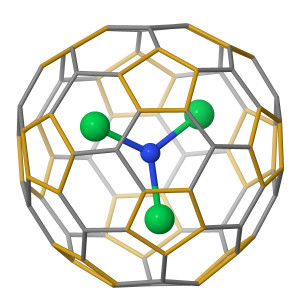 The endohedral metallofullerene Tm3N@C80IhWe study the synthesis, isolation and characterization of endohedral metallofullerenes.  Think of a soccer ball containing 60 vertices arranged in pentagons and hexagons.  If you place a carbon atom at each vertex, it would form a carbon cage (a.k.a a buckyball).  The molecules we work with vary in cage size from 60 to 120 carbons and we entrap metal atoms inside the cages.  By varying the cages and metals, it is possible to tune the molecule to obtain advantages properties.   Endohedral metallofullernes have applications in medical imaging, medical therapy, quantum computing and single molecule magnetism.

Ionic liquids, also known as molten salts, are substances which are fully ionized (all components are positively or negatively charged) and are liquid at whatever given temperature their application is being considered.  Chemists often define an ionic liquid as a salt that remains liquid below 100 degrees.  (Most naturally occurring salts, like NaCl, are very high melting.)  As compounds with both ionic and non-polar regions, ionic liquids are powerful solvents for otherwise difficult-to-dissolve materials such as biopolymers and transition metal complexes.  In addition to their usefulness as solvents, the non-volatility of ionic liquids means that they are useful as liquid electrolytes (as opposed to a salt dissolved in a volatile molecular solvent), in the separation of gas-phase mixtures, in engineering applications such as friction-free pistons, as heat storage and transfer materials in high-temperature solar thermal energy capture (a form of renewable power generation), and many other exciting applications.  In our lab, we aim to synthesize and characterize new ionic liquids, and develop new applications for them.

A catalyst is something which speeds up a reaction by lowering the energy barrier to that reaction taking place.  Compared to traditional stoichiometric reagents, catalysts can dramatically reduce the material and energy waste associated with chemical synthesis, often reducing the time and temperature required for a reaction to take place, as well as leading to more selective formation of desired products.  Catalysts are ubiquitous in nature—enzymes are catalysts—as well as the chemical industry, in which over 95% of commercial chemical products have involved the use of a catalyst at one or more steps of their manufacture.  In our lab, we apply transition-metal catalysis to the synthesis of ionic liquids, try to develop novel biocatalysts (take an enzyme known from nature and adapt it to the purposes of chemical synthesis), and look for novel catalytic reactions, or ways to optimize known catalytic reactions. 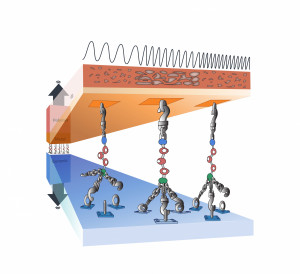 Schematic view of interface toughening mechanisms in polymer-metal-nanolayer-ceramic structures at various loading frequencies. We study the relationship between material structure and resulting function over length-scales typically ranging from tens of nanometers to subnanometer. We are particularly interested in the relationship between the chemistry and structure of materials in thin films and their thermo-chemo-mechanical behavior, adhesive and cohesive fracture properties, and behavior under complex loading and environmental conditions.  Applications for our work vary over a great range of technologies such as solar cells, microelectronics, advanced sensors, and biomaterials.