The purpose of the Catherine Burns Larmore Poetry Series, created by an endowment made in 2017 by Larmore’s daughter Catherine C. Larmore, is to attract poets for readings, symposia, workshops with students, festivals—events intended to enrich the lives of Emory & Henry College students.

Michael ChitwoodPoet Michael Chitwood, E&H ’80, returned to his Alma Mater to present the inaugural poetry reading of the Catherine Burns Larmore series on September 10, 2019. We will provide details of the September 2020 reading closer to the date. 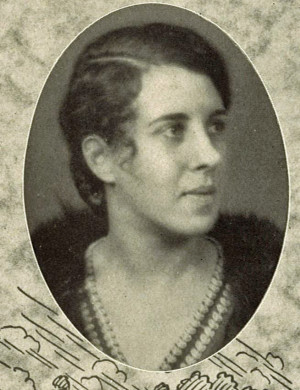 Catherine Burns LarmoreThe elder child of Nora Shuler Burns and Clarence Clifton Burns, Catherine Burns was born on February 28, 1908, and grew up in Lebanon, Virginia. A love of literature and life-long learning was nurtured in the Burns household. Her mother graduated from Martha Washington College in Abingdon, and her father matriculated from Washington & Lee. The family had strong Methodist roots. Her grandfather, Rev. J. W. W. Shuler, took a “selective course” at Emory & Henry College. Later he became pastor of the Emory Circuit, preaching to its faculty and president. Her Uncle, Dr. R. P. “Fighting Bob” Shuler, gave the College’s baccalaureate address in 1931.

Catherine transferred from Harrisonburg State Teachers College to Emory & Henry in 1927 and shared a happy year there with her brother, C. C. Burns. Both were part of the Lebanon Club. Gregarious and charming in nature, she felt honored to be selected as May Queen in her senior year. In the Spring of 1930, Catherine joined the Thalian Literary Society, whose entrance requirement was to say an original poem.

Upon graduation from Emory & Henry in 1930 with a 95 average in English over four years, Catherine joined the high school faculty in Saltville, Virginia. Some time later, while working in New York City, she was part of a contingent of women who took advanced studies at Columbia University. Encouraged by friends, Catherine returned to Appalachia to teach in Norris, Tennessee, for the TVA.  After marrying Ashby M. Larmore in 1940, she moved to Kennet Square, Pennsylvania, where Ashby had his law practice. Catherine remained active as a learner while becoming the mother of three daughters. Skilled in engaging young minds and exciting them about literature, Catherine was sought after as a substitute teacher in secondary education by the local Pennsylvania school districts. For many years, she served as a member of the Board of Overseers for Westtown School, a co-educational Quaker boarding school. She also edited the book Westtown in Trust by Rachel K. Letchworth.

A descendant of the Burns clan of Scotland (brother of the poet Bobby Burns), Catherine found her love of poetry blossoming as a student at Emory & Henry College. Poetry was a form of expression she shared with her father and brothers, William Shuler Burns, an attorney, and Robert Oliver Burns, an internist. At age 70 Catherine attended a writer’s conference and joined a women’s poetry group with such notable Quakers as Elizabeth Gray Vining and Mary Hoxie Jones. She was the only unpublished poet who was a member of this distinguished coterie.

with a vivid red strand —

It would be glorious!

It would be grand!

No one would know

What my pattern would be

But that vivid red strand

That poem and me.

Catherine C. Larmore with Students Jacob Booth, Claire Hogg and Corey Davis, Tobias Smyth Cabin, September 10, 2019Catherine C. Larmore, daughter of Catherine Burns Larmore, got to know Emory & Henry through visits with her mother’s college friends after their 50th reunion. In 1985 she journeyed with her mother to the campus for an alumni weekend gathering. The extraordinary bond of life long friendship among these graduates, the spirit of learning and community at the College campus, and the leadership of President Charles Sydnor and development officer Richard Trollinger deeply impressed her.  She created the Catherine Burns Larmore Visiting Poet Series Endowment in 2018 as tribute to this collegial spirit; her mother’s wonderful gift of teaching, love of literature and expression through poetry; and the remarkable Burns family and its roots in Southwestern Virginia.