The Emory Mercantile (or “Merc”) is the home of the college bookstore, providing books, school supplies–and all the gear you need to show off your E&H pride!

The Emory & Henry Mercantile is designed to meet the needs of the college students and college staff as well as the surrounding community. In our store, students can purchase all textbooks, school supplies, and art supplies needed for classes. Grocery and houseware items are stocked to assist students in their needs. The Merc also carries a large line of Emory & Henry College apparel and gift items.

The Merc in Marion 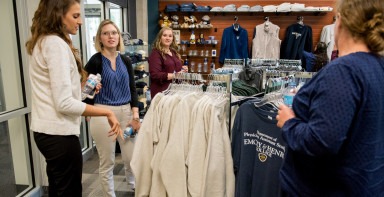 The E&H Merc located in Marion, Va. at the School of Health Sciences campus is now open. Pick up more of your favorite gifts and E&H swag at this second location. Enter on the west side, located in the main building at the former emergency room entrance.

Along with the Emory & Henry campus, the Mercantile shares a history in the community. In the summer of 1998, Emory & Henry College acquired a building in the commercial area of the Emory Village that would become its bookstore, called “The Merc,” representing its renovation to a style that reflected the primary function of two earlier buildings that stood on the same site.

The first building, a general store, was built in 1887 by C.B. Akers. After a fire destroyed it in 1892, it was rebuilt four years later and functioned both as a store and a post office. The store, which for several years was known as the Emory Mercantile Co., was purchased in 1931 by Fred Denton, who sold fresh vegetables and meat as well as general merchandise, including shoes, hardware and horseshoes. E&H students were attracted to its modern fountain and snack bar.

The large two-story, wood-frame building was destroyed by fire in 1962 and was replaced that same year by the current building, a one-story brick structure that for many years operated as a convenience store until it was purchased by the College.

The building was extensively renovated to provide more space for books, clothing and school supplies while recalling the appearance of an early twentieth-century mercantile.