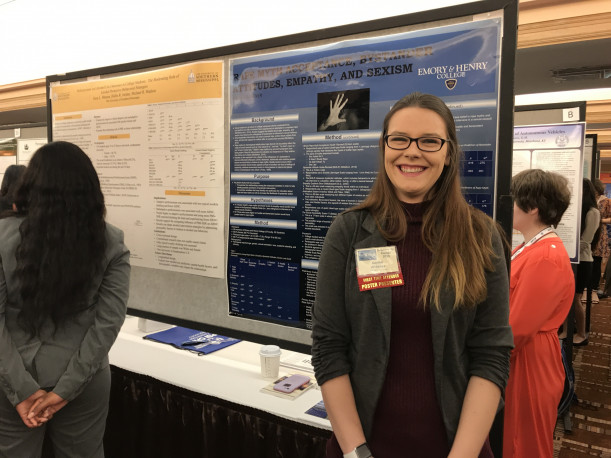 Kaylee Widener presents research at the 2019 annual meeting of the Southeastern Psychological Association (SEPA) in Jacksonville, FLSexual violence is an issue on college campuses where is estimated that one-fourth to one-fifth of women have experienced an attempted or completed rape (McMahon et al., 2014). Studies suggest that beliefs about rape, empathy, and sexism may influence the willingness of bystanders to intervene in sexual violence. Direct bystander intervention can help to prevent rape, protect future victims from harm, and provide support for victims after an assault has occurred (McMahon, 2010). Rape myths are stereotypical beliefs about rape that do not accurately reflect the reality of sexual assault such as “she asked for it,” “she lied,” “he didn’t mean to,” and “it wasn’t really rape.” Belief in rape myths may prevent bystanders from taking action if they do not perceive the situation as dangerous or if they believe that victims are to blame (McMahon, 2010). Empathy is also reported to be a factor in the willingness of a bystander to intervene (Bennett & Banyard, 2016). Moreover, individuals who endorse greater sexism are more likely to believe in rape myths. Hostile sexism occurs when someone actively discriminates against a those of another sex due to feelings of superiority, whereas benevolent sexism is more passive in nature and places women in stereotypical roles (Glick & Fiske, 1996). Linear regression analysis using the overall rape myth score and empathy as predictors and bystander attitudes as the criterion variable indicated that these two variables together accounted for 27.9% of the variance in bystander attitude scores. Multiple regression using the two sexism subscales as predictors and rape myth scores as the dependent variable showed that together hostile and benevolent sexism accounted for almost 60% of variance in rape myth belief scores, Results suggest that the likelihood of intervening can be predicted using measures of rape myth acceptance and empathy and that sexism can lead to rape myth beliefs. The relationship between sexism and rape myth acceptance shows that beliefs that place women in inferior or stereotypical roles are related to victim blaming as well as the belief that the perpetrator was not responsible for the rape. Although educational programs may be tailored to prevent rape myth acceptance directly, they can also be updated to target such topics as empathy, bystander attitudes, and sexism.