E&H vs. W&L: Far from ordinary

Posted October 22, 2019 by Monica Hoel
Saturday’s win over Washington and Lee brought back a lot of memories of  W&L games gone by. Here are a few of our favorites.

“With the ball on the W&L 39, and two seconds remaining, Taylor launched the ball toward the end zone for Yates to secure for the score and the victory.”

This is the final line of a press release issued by the E&H Athletics office after our Homecoming Day football game on October 19, 2019. To say it was a rousing end to Homecoming events would be an understatement: to use a cliché, the crowd went wild.

But to say it was our most memorable encounter with Washington and Lee football would be an overstatement.  It seems that E&H and W&L have a lot of unforgettable encounters.

The beginning of that same press release begins like this:

“With time expiring in the fourth quarter and overtime looming, junior quarterback Hunter Taylor (Summerville, S.C.) hurled a Hail Mary toward the end zone. Junior wide receiver Max Yates (Abingdon, Va.) was in the perfect position to snag the pass and fall over the goal line, winning the game for Emory & Henry College on Homecoming Saturday. The final five minutes resurrected memories of 1962 and Earl Hawkins’ legendary performance against the Generals, as the Wasps scored three touchdowns to bring an emotional conclusion to the game.”

For those of you not around in 1962, allow us to share why that game is so very famous, and also infamous.

According to an account in the 1963 Sphinx, Washington and Lee came to Emory & Henry for the annual Homecoming game, on October 6, 1962, with a 21-game winning streak, and their performance at Emory & Henry lived up to the reputation.  By the middle of the third quarter, the score was 33-14 with the Wasps trailing far behind the Generals. But the Sphinx writer explains that this all changed in an instant:

“Bending their backs to the task, the Blue and Gold came roaring back with a vengeance. Playing like a team possessed, they ran roughshod over the shocked Generals and, moments before the final gun, pushed across the winning touchdown to post a spine-tingling 38-33 victory.”

It was a day that made legendary the name Earl Hawkins (E&H ’65, dec.) – who scored 5 touchdowns that day. Other names recalled in that unforgettable game were Lin Parrish, Bobby Magill, Water Hite, Bill Munsey, and Curt Campbell who used his height to snag a well-timed interception.

But as we mentioned, this same game is also infamous, because it coincided with the loss of a campus icon.  John Ashbury (E&H ’65) recalls his memory of the sad ending of a glorious game:

“Back in 1962, those two teams played at Emory’s homecoming. It was the first game Dean Victor Armbrister had been allowed to attend following a heart attack earlier in the year. My date that day was a nurse I had been dating who was down from Frederick, MD, for the festivities. The game was so crowded that we had to sit on the visitor’s side – and about 10 rows up on the right side next to the rail (if you are looking from the home stands). Dean Armbrister was seated in a car parked close to the sideline just below us. The Wasps were trailing at the half 14-13. In the third quarter the Generals went up 33-13. Then the coaches cut Earl Hawkins loose. It was an exciting end of third quarter and into the fourth. Eventually the Wasps went up 38-33 and won the game. Almost at the end however, there was a great deal of sudden activity at the Dean’s car. I was watching what was happening on the field, and when I turned around my date was gone. She had jumped over the rail and rushed to the Dean’s car. But it was too late. Dean Armbrister had suffered another heart attack and died. All other Homecoming activities that night and the next day were cancelled. And Sunday’s services in the chapel were packed and very solemn. There was little joy that day until “Chappy” Mason [Dr. W.C. Mason] delivered the sermon. It was uplifting and full of hope. I’ll never forget that weekend.”

Believe it or not, there have been other legendary Emory & Henry stories around W&L football games.  In 1992, quarterback Eric Montgomery (E&H ’94) broke a bone in the W&L game, sending him to the sidelines for the rest of the season. Hopes of a winning season fell hard that day. His replacement was a player who had never played QB; but Cary Perkins (E&H ’93) finished the season as QB, helped lead the team to a 10-0 undefeated season with a victory in the first-round game of the playoffs (against Thomas More) before losing to Washington & Jefferson. Cary also won the Dudley Award that year.

“If my memory is correct in 1998 we were down 20-6 with like four or five minutes left on the clock. We got a safety and made it 20-8 and then with three minutes to go I threw a 41-yard touchdown to David Miller. Our defense, which I think was the best around, held them. I think we got the ball back with less than two minutes and marched down the field, and then I threw a 40-yard touchdown to, again, David Miller with 35 seconds to go and end up winning 23-20.” 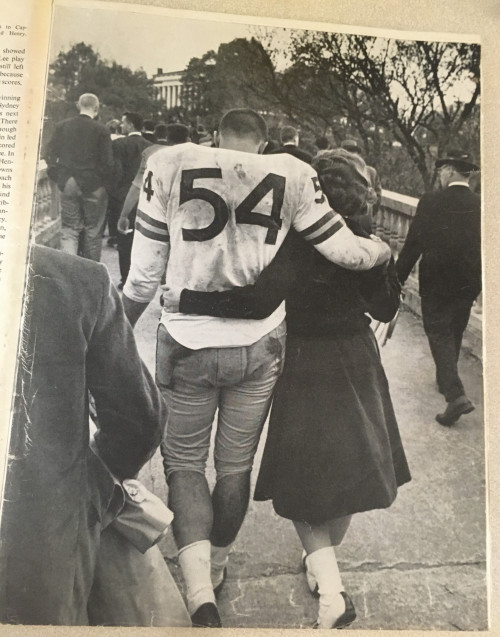 Even in loss, there is a great E&H twist. And we end with a great story from Hal and Clara Cox McHorris (E&H ’62):

“In the Fall of 1961, Sports Illustrated did an article about Washington and Lee’s football program, which had made some big changes in the previous years. The article was solely about W&L, who beat us by a score of 27 to 6.  Emory & Henry was mentioned one time in the six page article.  But on the sixth page was a full-sized picture of Hal and me! He was the starting Center and a team Captain, and I was a cheerleader.  As we were leaving the stadium, arms around each other after the game, someone took our picture from behind us.  We had absolutely no idea about it until the Nov. 6,196 1, issue of Sports Illustrated was delivered to our families!   The caption read, ‘Comfort in defeat comes to Captain McHorris of Emory and Henry.’ It is certainly one of our fondest memories at E&H – and we have many!!!”

“Bending their backs to the task, the Blue and Gold came roaring back with a vengeance.”
1963 E&H Yearbook,  The Sphinx