Posted October 25, 2019 by Rachael Wilbur
This year’s Literary Festival focused on author Charles Dodd White and the theme was Gothic Realism in the Appalachian Literature.

The annual Emory & Henry College Literary Festival was held from Oct. 24-25 in the Black Box Theatre of the McGlothlin Center for the Arts. “2019 marks the 38th year of the annual Literary Festival; that’s 38 years of honoring the literature of Appalachia,” said Nicole Drewitz-Crockett, assistant professor of English and Literary Festival director. This year’s theme for the festival was Gothic Realism in Appalachian Literature, ﻿with featured author Charles Dodd White. 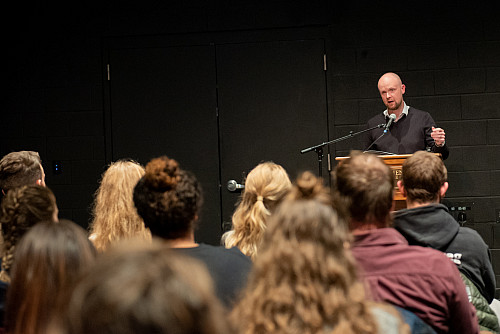 Charles Dodd White speaking during the Literary Festival.A number of different sessions took place over the course of two days, covering a wide range of topics on gothic realism and how it exists in the literature about Appalachia. Leading a few of the sessions and the topic of discussion on others was Charles Dodd White and his writings. Each year the Emory & Henry Literary Festival celebrates an outstanding writer with ties to Appalachia. The designated writer participates in the festival, which includes papers by visiting scholars, and meets with students in various forums. White is the author of three novels and a short story collection. He has been recognized for excellence in Appalachian writing with the Chaffin Award, and has also received a fellowship from the North Carolina Arts Council. He lives in Knoxville, Tenn. and he teaches English at Pellissippi State Community College.

The Emory & Henry Literary Festival began in 1982 with a program devoted to Sherwood Anderson, who spent the final 15 years of his life in nearby Smyth County, Va. Since that inaugural occasion, the festival has honored a living writer with strong ties to the Appalachian region.

2019 marks the 38th year of the annual Literary Festival; that’s 38 years of honoring the literature of Appalachia.
-Nicole Drewitz-Crockett