Michael Shipley is Serving the US Army

Posted December 04, 2019 by Monica Hoel
He is a Company Executive Officer in the 173rd Airborne Brigade in Vicenza, Italy.

First Lieutenant Michael Shipley is a 2013 Emory & Henry graduate. Right after he graduated, he enlisted in the US Army: he even adjusted his major to make sure he could finish in 4 years and then enlist.  In May of 2015, he graduated from the U.S Army Ranger School. He previously served as a Forward Observer in the 75th Ranger Regiment, a Special Operations unit located in Ft. Benning, Georgia. During this time he deployed twice to Afghanistan in support of the Global War on Terrorism (GWOT). 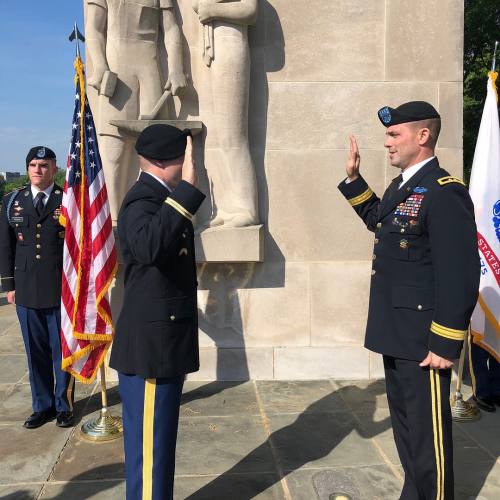 Michael Shipley at a swearing-in ceremony, E&H Class of 2013He is currently serving as a Company Executive Officer in the 173rd Airborne Brigade in Vicenza, Italy. His responsibilities include running the day to day operations of the company, including spearheading its maintenance program and forecasting future training requirements for the Commander.

In 2018 he earned his master’s degree in Public Administration from Virginia Tech, along with a Graduate Certificate in Homeland Security and received a commission as an Infantry Officer through Virginia Tech’s ROTC program.

He says he made the choice to join the Army because of the time in which he came of age. “Since growing up in the GWOT era, service to country was something engrained in me from a young age. Watching the devastation that occurred on 9/11 and the subsequent invasions of Afghanistan and Iraq played a large role on my decision to join.”

He also says Emory & Henry provided good preparation for his military service.  “Emory & Henry provided many of the leadership skills I’m able to utilize today. The liberal arts education exposed me to a wide range of viewpoints and offered me a new lens through which to view the world. Also, being a member of the football team further helped develop me as a person and a leader. The mentors who invested in me played a direct role in my future military career.”

“The liberal arts education exposed me to a wide range of viewpoints and offered me a new lens through which to view the world.”
Michael Shipley
E&H Class of 2013