Posted December 14, 2019 by Monica Hoel
Gary Jones (E&H ’83) had to figure out how to maintain a tradition he started. 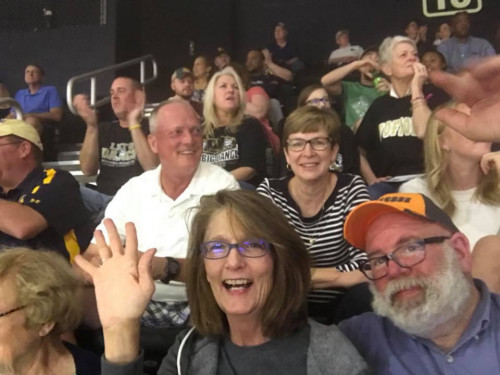 Friends gathered at the Wofford vs. ETSU men’s basketball game.Gary Jones (E&H ’83) has been friends with Mike Young (E&H ’86) since their days together at Emory & Henry.  Gary and his wife, Jenifer Jordan Jones (’83) came to feel like Mike was just part of their household when they were first married and living near Emory. So when Mike became the head basketball coach at Wofford College, Gary starting organizing an annual event he dubbed “Waspers for Wofford.” It was a gang of 1980s era college friends who would gather for a basketball game when Wofford was playing at ETSU. Some years they even went to the SOCO tournament in Asheville.

Of course the event was about watching good basketball. But more than anything, it was about what the Blues Brothers might have called “getting the band back together.” Waspers for Wofford always included dinner out, a couple of pre-game beers, and a lot of laughing and reminiscing. 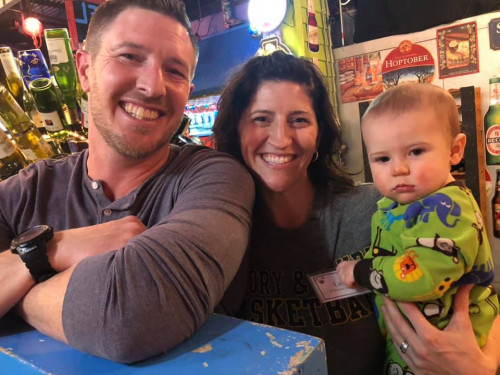 Abe and Leigh and Cole McIntyre at Waspers for Wofford.Along the way, Gary drew in folks who weren’t E&H grads from the ’80s. Coach Bob Johnson’s daughter, Dr. Leigh Johnson, joined the gang one year with a date – and then showed up another year with that date-now-husband and a new baby. Sam Walker, director of Emory & Henry’s food service, had known Mike when he worked for Wofford’s food service – and he has attended  Waspers for Wofford faithfully.

But the event recently faced a dilemma: Mike is now head men’s basketball coach at Virginia Tech, and Waspers for Hokies just doesn’t have the same ring. And getting tickets for a Tech game would surely prove to be a bigger hurdle. And who knew if Gary could really work up good attendance since the drive would be farther for many who had been attending.

But Gary never doubted. Infinitely optimistic, he polled the group for a new name, worked with friends to find a restaurant and check on tickets  – and on Dec.  15, the largest group yet (close to 70 in all) are gathering for what is now called “Hokie, Wasper, Hokie, Hy! EHC and VPI!”

The only difference now is that the stakes are bigger…so you just might catch a glimpse of Gary on your television.