Lisa Olive O’Quinn moved to Albuquerque in 2015 after James (E&H ’92) retired from the Air Force. “He’s the Director of Base Contracting for Kirtland Air Force Base in Albuquerque. It’s his dream job and now I’m doing my dream job!”

Lisa starting going to casting calls in Albuquerque and Santa Fe “just to see what being on set would be like.” But she got hired…she got hooked…and now she’s doing regular work as a background actor for movies and television shows. James calls it her “work hobby.”

New Mexico has had a long relationship with the film industry, but in 2019 they passed some tax incentives that made the state even more attractive for television and movie production. Lisa says Netflix and NBC Universal have both just announced they’re opening studios in Albuquerque.

So, there’s no shortage of opportunities for those willing to put in the hours required to be a background actor. “The hours can be brutal (for example 12 hour days with 4 am wrap times) but I get to be around creative people making movies.”

Lisa says she loves the work for a lot of reasons, not the least of which is the chance to meet a wildly diverse group of people doing exactly what she’s doing. “I’ve been in holding between scenes sitting between a homeless man and a federal judge and we’re all sharing life stories. Background acting itself can be as diverse as being featured in some scenes requiring actual acting to the more mundane scenes of being the blurry person walking down the sidewalk. Every day on set is different.”

You can catch her currently in a FOX production called Deputy. And she was recently in Briarpatch (USA Network) and Roswell (Netflix and The CW). She just completed filming a commercial for New Mexico Department of Transportation promoting an end to driving while intoxicated. She also has been in some movies, but she can’t talk about those projects until they’re in theatres. 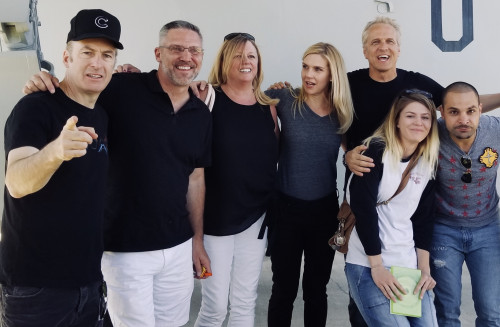 With the cast of Better Call Saul -- that's James and Lisa O'Quinn to the right of Bob Odenkirk and that's their oldest daughter Maggie next to Michael Mando.And it has becoming something of a family pursuit. “My daughters, Lillie-Mac and Anna-Sophia, have caught the bug and have been hired on some movies. Even James worked a day with me on Briarpatch.”

Lisa didn’t do any acting in college, but now thinks she would have enjoyed that. For now, she’s just excited for the opportunity to be around creative people in such an exciting industry. And, she finds that the calm demeanor she’s known for is helpful these days.  “Sometimes we get to meet pretty famous actors. Generally I don’t get star struck but I have to admit that being around Tom Hanks made my heart skip more than a few beats.”

On Deputy she has a recurring role as a reporter…so watch for her at press briefings.