Posted April 05, 2020 by Monica Hoel
Zach Hupp (E&H ’12) had the rare opportunity of traveling with the USNS Comfort as it traveled to New York City last week.

Zach Hupp is a Petty Officer 2nd Class for the US Coast Guard and serves in the Public Affairs division. On March 30, 2020, he got to be part of the air crew that provided a security escort from the USNC Comfort, which had been formerly stationed in Norfolk, as it pulled into harbor in New York City. The hospital ship was slated to assist with an overburdened hospital system in New York as they deal with an abundance of COVID-19 cases. 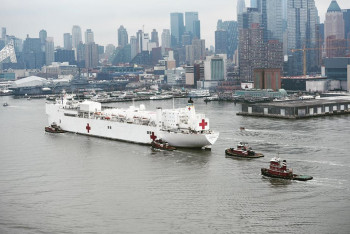 USNS Comfort hospital ship entering New York harbor on March 30, 2020.Zach says his job was to document the hospital ship on the transit, as well as the Coast Guard assets that were all helping with the security escort. “We were the primary law enforcement agency providing security support from the air. And as the photographer I was literally hanging out of the helicopter door the whole time!”

He says it was an honor to be part of that moment in history. “In the middle of such a worldwide issue, I got to be on the front line for a major part of the mission, ensuring that the Comfort safely made it to the pier. I have been part of several really neat things with the Coast Guard, but seeing such an impressively massive ship surrounded by federal, state, and local law enforcement and fire boats – it  was definitely an awesome experience.”

“…It was definitely an awesome experience.”
Petty Officer 2nd Class, US Coast Guard
E&H Class of 2012