No Problem in Houston -- until COVID-19

Posted April 07, 2020 by Monica Hoel
Christina Mitchell (E&H Class of 2019) has been serving as an intern for the International Space Station at Johnson Space Center in Houston, TX

When Christina Mitchell mentions her current job position, the first question has to be, “What do you do, exactly?”

Here’s how she explains it: “As a multimedia developer intern for the International Space Station (ISS) office in Houston my main job has been to comb through videos and photos astronauts have taken from orbit as well as astronaut interviews then try to put them together into a video that is engaging and makes sense.” Here is a link to one she produced was published.

But there’s more to this fascinating job.

“I also planned an event, including designing a flier, when Felix & Paul Studios [a virtual reality studio] came down and was able to arrange for them to give a talk to the virtual reality group at Johnson Space Center. I also spent a day photographing a kid who got to ‘be an astronaut for a day’ through Make A Wish. That was a really fun and rewarding experience. 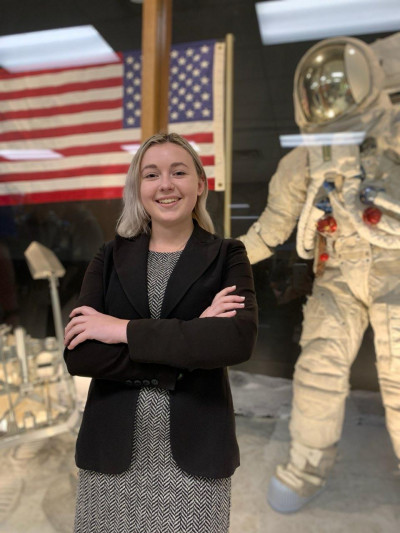 E&H Class of 2019, Christina Mitchell at Johnson Space CenterShe landed this plum internship because she met a NASA Langley Research Center rep at the Appalachian Fair in Wise, Virginia: he was there to celebrate Langley’s Centennial. He convinced her to change her major from a psychology/criminology combo to mass communications and then apply for a NASA internship.

“And I did! I didn’t really expect that I would get in because my GPA wasn’t perfect, but I worked really hard in my major that year and picked up a lot of experience with The Whitetopper and EHC-TV hoping that I may find a way in.” She says her mass comm professors, Dr. Mark Finney and Dr. Danianese Woods, were completely invaluable during her time at Emory & Henry. “I came into the department as a bright eyed eighteen year old who was confused on what path to take and whatever it was they saw in me, they almost immediately put me into leadership roles when they heard what I wanted to do and really guided me through growing into those roles over the next two years. I wouldn’t be where I am now if it wasn’t for their help and guidance.”

Even with all that she says she was still shocked when she got an email from NASA Glenn Research Center offering a position for summer 2018.

“To date it’s still my favorite job I’ve ever done, working with the Technology Transfer Office at Glenn where I got to work with scientists in their labs every day, to photograph them as they worked and learn about what they were doing. That summer I planned a big inventor recognition ceremony, photographed nearly 100 inventors in their labs, and sometimes got to translate technical engineering documents into media briefs. It was an incredible amount of fun and really solidified that I wanted to work at NASA again. After that I tried to keep building up experience and finished out my degree in 2019, and then took an internship with the communications office at NASA Goddard Space Flight Center where I did a lot of work coordinating media events and a bit of journalism. Now I’m at Johnson Space Center, where I’m working with the ISS team.”

She encourages other young people to look into these exciting internships at this link: intern.nasa.gov.

Now, of course, her work has been interrupted by the pandemic: she has been sent home to work like so many others, only she can’t work on the video projects without being hardwired to NASA systems.

But she’s making good use of this time. “On April 13, I’ll be starting a master’s in Industrial Organizational Psychology (psychology being a field I always loved) at Capella University. After that I may go on for a PhD in Human Factors (Psychology meets engineering) or another masters in Space Systems Operations Management. Perhaps both. I’m very lucky my mentor gave me the all-clear to work on other things since there isn’t much I can currently do. I should be able to have my master’s program finished by this time next year.”

For the moment, she is back home in Abingdon, doing work with her family around the house…which includes helping to care for her mom’s horses – one of which is a retiree from the E&H barn! (His name recently got changed from Biggie to Houston, by the way.) “He’s been such a perfect addition to the farm and is loving life!” Her next steps may still be developing, but she says, “Wherever my path leads in the future I hope to continue in a role where I can still interface with technology and space exploration, whether or not that is with NASA, though I would love to go back there at some point.”

“ I wouldn’t be where I am now if it wasn’t for the help and guidance of my Emory & Henry mass communications professors.”
Christina Mitchell
E&H Class of 2019