Posted April 11, 2020 by Monica Hoel
But they sure do miss seeing everyone.

Anyone who knows the Emory & Henry Chief of Campus Police, Scott Poore (E&H, Class of 2010) knows that he is a man with a wry wit. He is professional to his core, but he has a knack for being able to handle even serious situations with a good sense of humor.

But nowadays, he is facing a new challenge: April at Emory & Henry with no students. “It’s always so busy this month – with Ampersand Day and baseball and softball and exams and Air Band….heck, I even miss Air Band!” 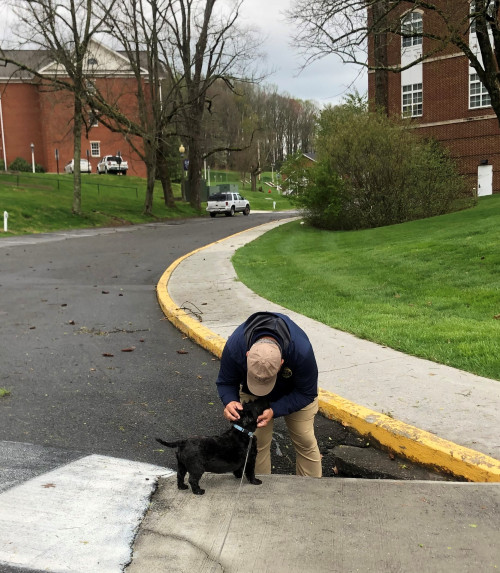 Scott Poore giving a little attention to Bonny the Scottish Terrier.[For those of you unfamiliar with that term, it refers to a student event that is part air guitar and part dance contest – and it is often accompanied by a bit of frivolity. It can be a busy event for campus police who are trying to keep everyone safe and sound.]

Scott says he misses seeing everyone and helping with all the events that typically accompany April in Emory, but the campus police team is still working hard to keep Emory & Henry safe. They routinely and constantly check on doors, buildings, fire alarms and more. Just because there are no students, that doesn’t mean there are no worries, and every officer on every shift is busy.

Scott says he is looking forward to being able to get together with friends and coworkers again, and he says he’s learning a lot during these unprecedented times. “When this is over, I won’t take simple things for granted any more.  Things like just seeing people and spending time with friends – I miss that. And I miss all our students – even the ones I have to get after a little!”

“When this is all over, I won’t take simple things for granted.”
Scott Poore
E&H Class of 2010