Got a Minute? Read about Mike D before his television debut!

Mike De Los Santos (re’06) was known to most of his classmates as “Mike D” – and now Mike D is known all over the world. He is the creator of Mike D’s BBQ, and he is selling his now-famous sauce to customers in all 50 states and 5 countries. 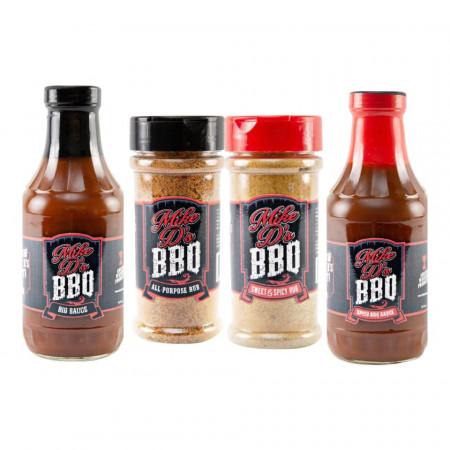 Mike began his sauce empire by blogging about and reviewing sauces. His friends told him he needed to start marketing his own because it was better than all the products he was writing about. He feared that the market might be saturated (with sauce) but he soon found out that he had a product people loved.

Now he’s opening a storefront that will have all the supplies needed for a great barbecue experience – from sauce, to wood pellets, to custom-built smokers and grills. “It’s tricky to open a business right now, but one of the things that has happened during the pandemic is that the barbecue and outdoor cooking space has seen a boom. More and more people are cooking at home and they’re ordering more grills and smokers because they’re looking for things to do outside the kitchen.”

Mike really does have a secret ingredient: neighborly love. “Most of the products we’re stocking in the store are made by women-owned or minority-owned companies. And our custom grills are built by someone here in the community.” Before doing barbecue full-time, Mike was Deputy Director for Action NC, a non-profit that works on community issues in North Carolina, his area of focus was on affordable housing and economic justice. So his thoughts are never far from social justice matters.

The fact that he has quit that job is exactly why you can catch him on television soon! Mike is one of the participants on a new Discovery Channel reality show called I Quit! Cameras followed Mike’s work and the work of 5 other companies for a year and chronicled the highs and lows of operating your own business. Don’t miss the first episode as it airs on Tuesday, August, 18, 2020, at 10 pm.