Got a New York Minute? Find out what Matt Whitenack is doing in the Big Apple.

Posted August 24, 2020 by Monica Hoel
Matt (E&H ’96) is a travel advisor in New York City…and he’s finding ways for us to travel virtually during the pandemic!

Matt Whitenack’s New York City travel agency and tour company is called GothamGuru; he’ll help you plan your “Gotham Get-away,” and his company Facebook page is GothamGuru’s Gaggle. He says he thinks he may have picked up his love of alliteration from E&H English professor, Dr. Felicia Mitchell.

But his love for the Big Apple was cultivated all on his own. Shortly after graduating from Emory & Henry in 1996, his parents drove him from their home in St. Paul, Virginia, to New York City. He quickly made NYC his home. 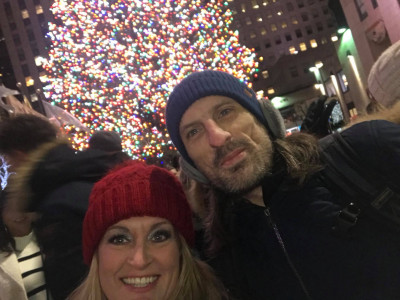 Matt Whitenack with fellow alum, Angie Roberts Mattingly (E&H ’98) on Angie Roberts Mattingly on Matt's Winter Wonder WOW tour.His first foray into setting up travel plans came from planning visits for his parents when they were coming to town. He wanted their time in New York to be meaningful and interesting, so he made very specific plans that included history and behind the scenes experiences that a run-of-the-mill touring company might not consider. Eventually it dawned on him that others might enjoy that sort of personal attention to their big city travels. In 2018, he launched GothamGuru. Soon after the launch, Matt realized he enjoyed the work so much he expanded the company’s offerings to include all types of travel to all global destinations – not just NYC.

The pandemic has put a dent in his ability to welcome out-of-staters to New York and send travelers to other countries, but he’s finding that people who live in or close to New York are looking for unique travel experiences that won’t take them too far from home. And, because Matt is a clever thinker, he is also offering virtual tours of the city that give history, context, little-known stories, and deeper meaning to the icons of the place he now calls home. A recent online Titanic tour gave historic facts of the ill-fated voyage and then took online participants on a PowerPoint tour of some of the buildings and monuments that are connected to the famous ship accident. [Writer’s note: it was really fun, and I’m planning to go on the next one!]