Got a minute? Cassidy York Sharp (’04) Has a New Title

Posted August 24, 2020 by Monica Hoel
She also has a crown and a sash – and a couple of adoring fans.

Cassidy York Sharp’s kids looked at her one day and told her it was time for her to enter a pageant. “They said, “Mom, you’re beautiful! You should do it!” Both of her kids have competed in pageants, and they’ve had a great time. “I finally realized I needed to stop telling my kids I can’t do it. I tell them they can do anything, so why would I limit myself?”

So she entered a pageant last year and did so well that she did it again this year. And this year, she won top honors in the Tennessee pageant. After winning the title of Modern Miss Tennessee Grand Supreme, she had to keep going. “It kind of meant I had to go to Nationals!”

And at the national level in 2020, she won the title of U.S. Modern Woman Novice Supreme: meaning she was among the top three in the nation. 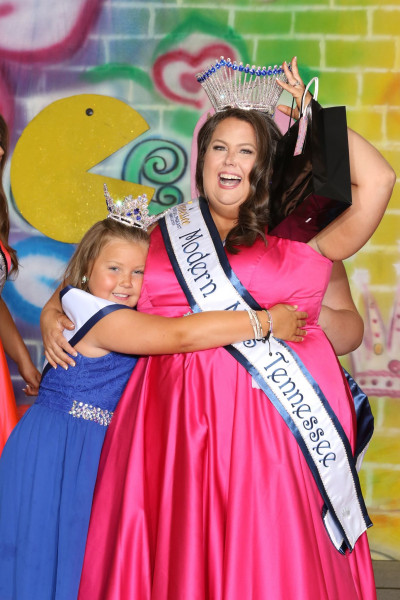 Cassidy York Sharp (’04) with daughter Piper.Cassidy claims to be the most “un-beauty queen beauty queen” ever because her go-to outfit is jeans and a t-shirt. But the AmeriFest pageants’ motto is “It’s More Than Just.” She says it’s more than a crown and photo opportunity, it’s also about community service which she does a lot of with her kids.

Hearing her describe the process, it’s clear that the sash and notoriety were all terrific, but the part that really made her feel like a queen was hearing her kids scream for joy when she was announced as a winner. “My kids have learned wonderful lessons through their pageant experiences. And they know that we don’t always win, but we can be happy for someone else who wins.”

Listen to a conversation with Cassidy about her experiences in the WEHC-FM archives: https://archive.org/details/OntheDuckPondWall