Posted September 16, 2020 by Leah Prater
A collaborative this fall between Emory & Henry College and Barter Theatre is helping theatre artists break through the limitations of a pandemic and into a world of innovative theatre production.

The Emory & Henry Theatre Department joins professionals from Barter to present eight new short works that will be introduced on Facebook and later on other online and social media formats. The virtual, digital series, called “Outbreak: Appalachia in the Time of Covid-19,” are being directed, designed and choreographed by E&H faculty and Barter professionals and performed by E&H students.

The performances are being rehearsed and recorded using a variety of safe practices, including internet technology as well as a large green screen from which to project scenery. The new approach to theatre-making is intended to give students the opportunity to create art at a time when coming together on a traditional stage is impossible.

“It also allows students to maximize this semester of their education to gain new skill sets specifically relevant to the contemporary theatre while remaining nimble and creating great theatre in the current situation,” said Dr. Kelly Bremner, chair of the E&H Theatre Department.

Even for Barter professionals, most of the techniques applied to a virtual theatre world represent new experiences, according to Nick Piper, associate artistic director at Barter. “This has been new for all of us. And it all comes down to figuring out what is the best way to tell these stories,” he said. “Everyone is getting to learn a new skill; we’re creating a new kind of theatre.”

Among the plays to be presented are “Pandemic Party,” by Stacey Isom Campbell, which will be the first production to be released from the series. Other pieces include plays written by Emory & Henry alumnus Pearl Moore, Derek Davidson, Silas House and Bianca X as well as a musical written by John Haggerty and Catherine Bush, and dance pieces by Emory & Henry Assistant Professor Annalee Tull and Barter resident choreographer Ashley Oliver-Campos.

The series is being presented with support from the McGlothlin Center for the Arts and the Emory & Henry Theatre Department. Performances will be available on https://www.facebook.com/emoryandhenrytheatre throughout the semester. 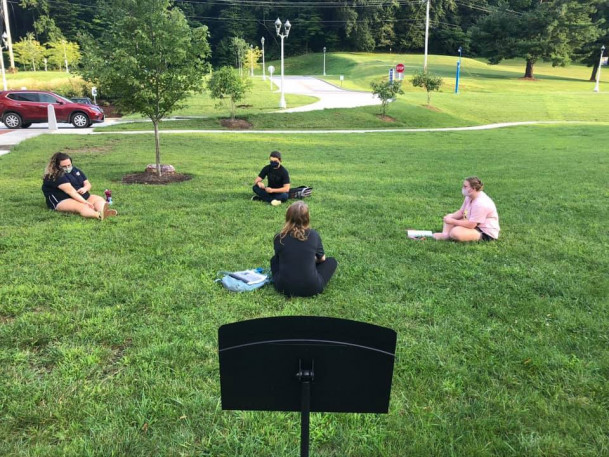 Students at work near and far. Assistant Director Brittany Welch zooms in from New York to help the cast of PANDEMIC PARTY with a long form improv.

It allows students to maximize this semester of their education to gain new skill sets specifically relevant to the contemporary theatre while remaining nimble and creating great theatre in the current situation.
- Dr. Kelly Bremner