Posted October 11, 2017 by Monica Hoel
The book, “Hidden Figures,” has been made into a movie and everyone is loving the story. But you might not know about a couple of E&H figures who are in the story.

If you’re reading Margot Lee Shetterly’s book Hidden Figures (which has a movie opening on Christmas Day 2016) you may have noticed that toward the end of the book there is a reference to Katherine Johnson working with John Young. That’s Emory & Henry’s John Young, Class of 1955 (deceased).

Hidden Figures tells the story of the unsung “computers” – the women, many of whom were African American, who crunched the numbers for engineers. It’s a story of the people who were pivotal to the space race but had barriers to being classified as engineers because of gender and race. One of the main figures profiled in the book is Katherine Johnson: the woman who John Glenn requested to do the final calculations for re-entry before he would agree to his trip into orbit.

Katherine taught school for many years in Marion, Virginia, and her first husband, James Goble, was a brother to Scrapper Broady’s mother. Scrapper is a 1970 E&H graduate and is currently serving his alma mater on the Emory & Henry Board of Trustees. He was among the first African American students to study at Emory & Henry. He remembers John Young’s father, Dr. Worth J. “Rusty” Young (E&H ’27, former E&H physics professor) speaking highly of his aunt’s work. “And she spoke highly of the Youngs, too.”

John Young worked alongside Katherine for around 25 years.  John’s brother, E&H alumnus Phil Young (E&H ’62, self-described “retired rocket scientist”) also spent his career at NASA. Phil worked with Margot Lee Shetterly’s father, and remembers Mary Jackson and Christina Darden (profiled in the book) from his days at NASA’s Hampton Roads division. He also met Katherine Johnson a time or two. Phil says Katherine told him that she takes credit for teaching John to talk. “They called him Silent John in college. One day at Langley, Katherine threw some paper in John’s waste basket, and he said, ‘Who told you you could use my trash can?’ And Katherine shouted, ‘He can talk!’”

Back in 1985, Patsi Trollinger (E&H ’72, former E&H Public Relations Director) wrote an E&H Alumni Magazine story about the large number of E&H alumni who were involved with the space program. Phil says the recruiter from Langley would visit Emory & Henry because they needed good employees, and they needed a lot of them. “He liked the graduates from Emory & Henry, so he kept coming back to campus to recruit. My father [Dr. Rusty Young] would point out the students who were especially promising.” The alumni magazine article includes a long list of over 25 alumni who worked at Langley and NASA over the years, but conversations will prove that it still isn’t an exhaustive list. Technical writers, engineers, mathematicians – there were many roles in the space program filled by talented scientists with E&H degrees.

“It’s amazing that so many E&H people worked on Apollo. With only 5-6 science grads a year versus the numbers being put out by places like Purdue – Emory & Henry probably had a higher percentage of alumni in the space program than any college in America.” 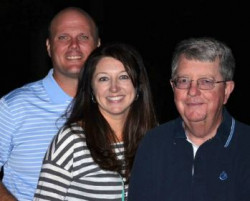 Phil Young (E&H ’62, former NASA scientist) posing with daughter Wendy McGlohn Green (E&H ’97, decorated educator) and her husband, Doug at a recent family gathering. Phil remembers being a high school kid and standing at the old filling station in Emory and watching Sputnik fly over Emory & Henry. Now he marvels at how many Emory & Henry alumni were part of the United States’ first foray into space

Scrapper Broady’s aunt, Katherine Johnson, has had her story told in the book Hidden Figures.