“The Trap of Nostalgia”

Posted March 17, 2021 by Monica Hoel
Morgan King’s new full-length animated feature is a throw-back to a popular 1980’s classic, but he was careful not to be limited by the past as he created something he wanted to stand up in the present.

Morgan Galen King says some of his best memories at E&H were setting up green screen and making movies. Very graphic movies to be exact. He recalls a conversation with his mass communications professor, Dr. Teresa Keller, about whether this major would help him make horror movies. He laughs and says, “She wasn’t sure what to do with me!”

But Morgan knew what his passion was, and he has never let go of his filmmaking ambition. And, in March, he just debuted a full-length animated feature film at the 2021 South by Southwest conference. 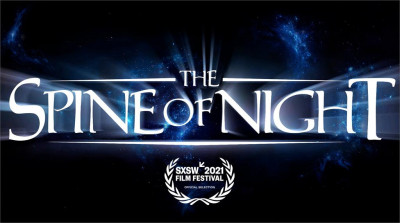 The movie titled The Spine of Night (you can watch a trailer here…but be forewarned of graphic violence even in the trailer) is based on a short film called Exordium, is an homage to the Heavy Metal style of comics, and is animated in a style that is reminiscent of the 1980s cult film, Heavy Metal. Hand rotoscoping isn’t new, and it adds not only nostalgia to the piece, but also added reality in the characters portrayed.

But even though Morgan’s film is in many ways meant to pay tribute to that old style, he warns of “the trap of nostalgia – where you don’t address the shortcomings of the thing you love.” This film still utilizes some of the portrayals of women and violence that the genre is known for, but he was worked to update the visuals in a way that is more sensitive to current societal norms.

Voice actors for the film include Lucy Lawless (of Xena Warrior Princess fame) and Richard E. Grant (most recently in Star Wars: the Rise of Skywalker). The project took seven years to complete, and is getting a lot of attention. Here’s a link to an article in IndieWire that lauds the film and predicts continued success.

The Radford, Virginia, native speaks fondly of his time at Emory & Henry in a brief radio interview with WEHC, available in the archives here. (Interviews are listed in alphabetical order.)