All the World’s a Screen

Posted March 18, 2021 by Monica Hoel
Kari Kitts Rothstein isn’t waiting for theatres to reopen before expanding her passion for live dramatic performance. She has found a clever way to bring theatre to your computer screen – and the response has been great.

Kari  has been busy breaking ground. Not literally, but certainly figuratively as she has started “A fully virtual bicoastal theatre company.”

Virtual Repertory Theatre Collective (VRTC) is utilizing technology to bring actors together from a variety of locations to perform classic plays. In-person theatres are still a problem in this time of Covid restrictions, so Kari has found a way to beat the limitations. 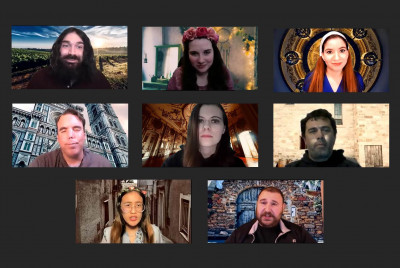 Kari says this ground-breaking method of delivering a play actually feels very familiar. “Virtual theatre is just like live theatre except for the fact that Zoom is our stage. We use virtual backgrounds as our sets and still do costumes, blackouts, etc. just like in a live stage show. We can’t hear or see our audience but we always host a talkback afterwards and it’s fun to see their reactions and answer their questions.”

The acting crew launched their project with an ambitious production of Romeo and Juliet back in February of 2021– just in time to provide quarantined couples with a romantic date option that wouldn’t require them to venture into restaurants and candy stores.

VRTC’s inaugural season continues in March as the cast dives into Anna Christie, a play by Eugene O’Neill that won the Pulitzer Prize for Drama in 1922. A revival of the play in 1993 featured the talents of Anne Meara, Liam Neeson, Natasha Richardson, and Rip Torn. VRTC promises an approach that is fresh for the old classic.

Kari serves as the Artistic Director for this production and is also taking on the role of Anna. She says the part had challenges, but she leaned on an earlier performance to get it just right. “One of the most wonderful things about working on this show are some of the unique dialects. Mastering a Minnesota dialect tinged with Swedish is a very interesting process. It was a challenge in the beginning but I found a review from when Natasha Richardson played Anna and something about seeing the way she pronounced the word sailor made it click in my mind and mouth.”

Attendance for their first production was terrific: more than 175 were in the real audience for the virtual production. Hopes are high as this next show takes the stage…uh…screen…on March 27 and 28. You can get tickets here.