When the pandemic hit in 2020, there were a lot of jokes about the technology learning curve. But in the midst of the stress of learning new tricks, many found out that there was joy to be found in all this new technology.

As work, education, family gatherings, library story-time, trips to the museum, theatre, parent/teacher conferences, and everything else in the known world was suddenly conducted online, a lot of people laughed and said that our learning “curve” was really more of a straight line – going up – steeply. But there were some tech applications that were more enjoyable than others.

In particular, the Zoom Happy Hour took off in a big way. Faced with the reality that they wouldn’t get to physically be together for awhile, a lot of college friends began to organize Zoom cocktail parties. And a few E&H groups have used the get-together as more than a passing fad.

ITK (I Tappa Keg) is the moniker assigned to a group of Emory & Henry college friends who finished at E&H in the early 1980s, and the group has been doing Zoom cocktails for the entirety of the pandemic. With friends calling in from Hampton (Patty Lay ’81 and Ann Sharp Bane ’81); Galax (Rose Neese Houk ’81); Abingdon (Beth Roberts ’81); North Carolina (Jane Pierce Lewis ’81, Lisa Neely ’83, and Susan Nork); Richmond (Adrienne Padget ’81); New Hampshire (Kathy Forand Kimball ’81); Maryland (Gail Webb Owings ’81), California (Christina Adams ’83) and Leesburg (Rhonda Story Gross ’83). The group has met monthly for general news and updates, to celebrate birthdays, and to catch up overall. Beth Roberts has kept the gang organized and she says the first couple of gatherings had them all scrambling to figure out how to use Zoom, but these days it’s less about the technology and more about catching up with friends. The group has referred to their regular happy hour as a “silver lining to the pandemic” giving them time to reconnect on a regular basis.

Another group of 1980s friends, the intramural softball team known as “The Famers” (short for The Alcohol-o’-Famers), had their first reunion in over 35 years via Zoom. Ricky Barker (’84) and Myron Wingfield (’83) rounded up the gang and hosted a “re-Zoom-ion” in June 2020. They continued to meet a couple of times a month until recently when, as Myron says, “true to our nature as observed during college, we have started to slack off.” The Famers also include Ernie Braganza (’87), Walter Weikel (’83), Bob Johnston (’87), Chip Konrad, Tom West, Bill Mapp (’85), Richard Lilley (’86), Joe Marshall, Steve Bowery (’84), and Chris Criscione (’85); “but some of them will deny this if asked.” They say the opportunity to reconnect has been truly meaningful. “It’s been great to see how we’ve all changed and how we’ve all stayed the same. The friendships started all those years ago are still solid. These friendships abide.”

“Zoom Shenanigans” is yet another group of 1980s era alumni who have met regularly during the pandemic: in fact, they’ve met every week since the big Covid shut down in March 2020. Suehonor Hamby Connor (’85), Laura Craven Duncan (’84), Mollie Rorrer Gore (’84), Beverly Sheddan (’84), and Monica Hoel (’85) have gathered every Friday at 5 pm – and when the time didn’t work for everyone, at 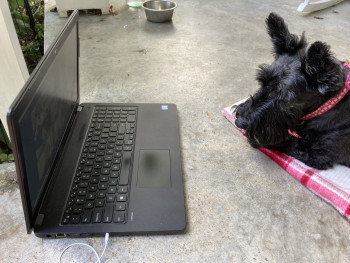 The Zoom Shenanigans calls usually include updates from all the pets, whether the news is happy or heartbreaking. Bonny was serenaded by the crew on her birthday.least two would jump on the call to keep the streak alive. The past year added a layer of complexity to a complex world, and the five say that being able to check in with each other routinely has been a bright spot – allowing room for all the sadness and frustration of the real world, but also making space for a little levity to seep in. The gang has toasted with peronalized Zoom stemware, recognized weekly “Covid Blessings,” and mailed each other provisions when toilet paper and cleaning supplies ran short. Beverly says having technology available has been a blessing. “We’ve traditionally tried to get together a couple times a year, but our Friday Zoom call has really allowed us to be more in touch with each other about our lives and all the joys and complications of this past year.”

So while many would say that technology is impersonal, these alumni might argue that if done right, technology can provide for some very personal and meaningful interaction. And when physical distancing is the safest plan of action, Zoom Cocktails can bring back the flavor of what we’re missing out on.