Give Us Emory & Henry In the City! 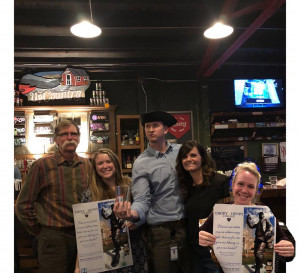 Because Emory & Henry in the City fell on the anniversary of Patrick Henry’s most famous and oft-quoted “Give me liberty” speech, the event took on a few new twists this year!

Emory & Henry in the City (#EHCITY) is the E&H Alumni Association’s annual happy hour event. It takes place on one day (the last Friday in March…unless Easter falls on that weekend), but it occurs in many locations. The tag line often used is “One Night: Many Happy Hours!”

If an alumnus doesn’t live near a happy hour site he or she can download a poster from the E&H webpage and snap a selfie with it to post on social media using the hashtag #EHCITY. Or, some folks just raise a glass and toast alma mater without the poster. Posts come in from all parts of the world, and this year we received a photo from Zach Hupp who is stationed in Bahrain and John Yao who lives in Australia.

This year we heard from alumni who were traveling and wanted to connect with alumni in cities where they don’t normally live. Frank and Jo Berman were “snowbirding” in Florida and got together with Tampa alums; Taylor Lyne was at a conference in New York City and connected with Big Apple grads. 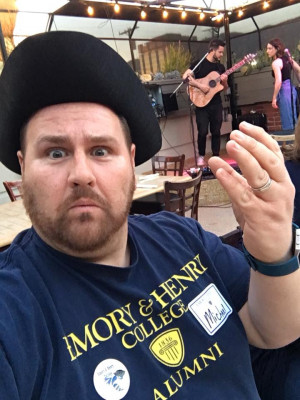 Each happy hour location receives a box of swag with a few items to use as door prizes, and because of the speech anniversary this year’s swag box contained a 3-corner hat. Alumni were encouraged to share their best “PHP” (Patrick Henry Pose). Alumni got into the spirit and you can check out great pictures in the album found on the E&H in the City webpage.

Perhaps no PHP photo was more noteworthy than the one received from Sacramento, California, featuring two well-known public servants: Pam Kestner (’83), Virginia’s Deputy Director of the Department of Housing and Community Development, and Senator Toni Atkins (’84) who, only a day earlier, had been sworn in as the President Pro Tempore of the California Senate.

Monica Hoel (’85), E&H Director of Alumni Engagement, says the numbers are great, but the number of participants isn’t the most important thing. “I almost wish we had never started counting: because we’re always going to want to beat last year’s numbers. The best part of this event is alumni getting to know each other and sharing pride in their alma mater. We have fewer than 20 alumni in Oregon, and 3 of them met each other over a beer because of this event – one drove over 100 miles!  We only have about a dozen alumni living in Arkansas, but they had 9 people at their event as three of them gathered with their families. An alumna in Harrisonburg met someone she wants to be her professional mentor. Those are my favorite stories!”

She did add, however, that it’s fun to be able to say that the event has gotten bigger every year!

Hoel says this is the biggest volunteer-led event the alumni association holds. “With 40 events, it’s fair to say this event could never happen without clever and energetic volunteers. And because so many people look forward to the event, I now have people contacting me to volunteer instead of waiting for a call! Our alumni really are just the best.”

“We’re always going to want to beat last year’s numbers: but I think the best part of this event is alumni getting to know each other and sharing pride in their alma mater.”