How do you love your neighbor in the midst of conflict?

Posted January 29, 2019 by Monica Hoel
A book by Rev. Wil Cantrell (E&H ’01) intends to help United Methodists remain committed to the Church during a contentious debate.

Rev. Wil Cantrell (E&H ’01) finds himself at the center of a storm.

An elected delegate to the United Methodist General Conference – an event that only occurs every four years – Wil attended the 2016 event as expected. What was not expected was that a controversial agenda item would be tabled for further discussion and a later vote with the potential to split the denomination. The agenda item in question is described as an examination of “paragraphs in The Book of Discipline concerning human sexuality and exploring options to strengthen the unity of the church.”

At the heart of the discussion is whether LGBTQ persons can be ordained or married in the United Methodist Church. The current Discipline allows for neither. Some say this is as it should be. Some say it is time for more inclusion.

Delegates at the Conference will gather for a special called session in February 2019 to deal solely with this one agenda item. 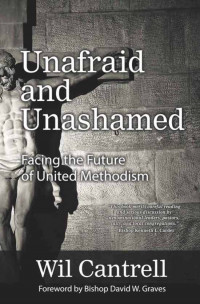 At the 2016 gathering, Wil used a blog to share thoughts about proceedings and discussions surrounding the many issues debated at the conference. A book publisher read his work, noted his number of followers, and asked if he would be willing to write a book focused on navigating the current controversy. Unafraid and Unashamed: Facing the Future of United Methodism was released in 2017, and was mostly meant as a resource for pastors as they consider how to talk with congregations about this issue that has become divisive for the United Methodist Church. He says everyone was “telling people how to think, but no one was offering a way to approach the matter with kindness and spiritual care.” He hoped this book could help. And hoped it might also touch on a larger issue of how to love each other across divisions in an increasingly divided world.

As delegates prepare for the historic vote, Wil’s book has become the go-to resource not only for pastors, but also for lay persons, church leaders, and other general conference delegates. Wil hopes it will lead churches into important conversations prior to the headlines that will no doubt follow the highly anticipated decision. “We need to be talking now. It would be awful if church members only hear about it on CNN after the vote is complete.”

He recalls offering his own congregation at Concord United Methodist Church (Knoxville) a chance to attend a discussion of his book. They only casually mentioned the event, put out 20 chairs, and 120 people showed up.

Wil is careful to explain what the book is and is not meant to do. “My agenda is not to tell people how to think about this issue; it’s to help people understand the issue and each other. I want people to understand that two compassionate, intelligent, Christ-centered, Bible-believing Christians can disagree. But in the end, we hope they will remain committed to the Christian faith and the Church – no matter what.”

Wil likes to say that we need to “make room in the church” for all Christians. He tells the story of two of Jesus’ disciples who illustrate his point. “Matthew was a tax collector who basically turned his back on his own people and sold his soul to the Roman Empire in order to enjoy a wealthy lifestyle. And then there was Simon the Zealot who was engaged in violent acts, which today we would label as terrorism, in an effort to overthrow the Roman government. Jesus made room for those two among the 12 – so who are we not to make room?”

Wil admits that during his own personal development he has intellectually landed on both sides of the sexuality issue now facing the church. But he remembers that no matter where his head was on the issue, his heart was unchanged: he loved Jesus and was called to love his neighbors.  He recalls mentors who helped him know Christ better – “some were extremely conservative, and some were extremely liberal. But they were all Methodists.”

He remembers lessons from Dr. Joe Reiff’s (faculty member, E&H religion department) “Church and World” class. “We learned to think critically and think Biblically. And Emory & Henry let us know they were training us to have a voice and not shy away from the debates of the day.”

With so much riding on this February meeting, it’s a lot of pressure to be part of the vote. But apparently Wil has a process for big decisions. “Two of the biggest and best decisions I ever had to make were about attending Emory & Henry and asking Rebecca to marry me. After enough prayer, both were gut decisions where you eventually just know what the right thing is. You’ve got to make the best decision you can with the information available to you and trust God to work through you and, if need be, in spite of you.”

There is no denying that the Church is facing complicated issues, but Wil expresses confidence as he points out, “God hasn’t given up on the church despite its controversies and failures in the past. It is God’s church…not ours.” And he has found encouragement for the future in conversations like the one that happened after his congregation discussed his book. “A member of the church came up to me and said, ‘I thought I had this thing all figured out. But now I realize the most important thing is that I need to worry less about being right – and worry more about making sure everyone feels loved.’ Hearing that was fulfilling…and humbling. We all serve God the best we can; and I am humbled that this is my role at this time.”

“I want people to understand that two compassionate, intelligent, Christ-centered, Bible-believing Christians can disagree. But in the end, we hope they will remain committed to the Christian faith and the Church – no matter what.”
– Rev. Wil Cantrell (E&H ’01)