Posted January 30, 2019 by Leah Prater
Assistant Professor of History, Matthew Shannon, has released his new book that highlights the relationship that Cold War-Era Iranian students had with the U.S. education system and how it affected their world view.

Professor of history at Emory & Henry College, Matthew Shannon, an expert on Iran-American relations has released a new a book on the subject Losing Hearts and Minds: American-Iranian Relations and International Education during the Cold War.

Shannon is a historian of America’s global interactions during the twentieth century, particularly with Iran. In addition to teaching in the History Department, he is the director of Connections, a capstone course in the Core curriculum that focuses on global citizenship. Shannon is part of a wide field of scholars addressing the subject of international education. He also has a passion for the liberal arts. While other scholars write about the military of the Cold War, he writes about the culture; thus, tying many ideas together in a typical liberal arts fashion.

“The lens of international education integrates various sub-fields of history that are not always in conversation with the other, which in turn produces a richer picture of the past,” said Shannon. 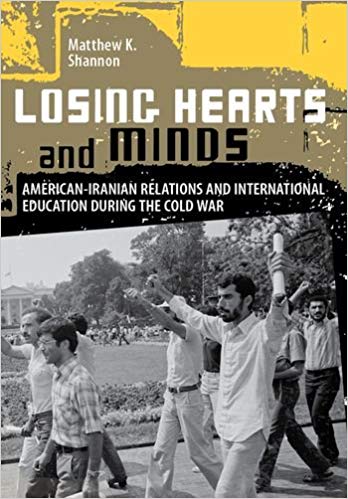 In Losing Hearts and Minds, Shannon tells the story of an influx of Iranian students to American college campuses between 1950 and 1979 that globalized U.S. institutions of higher education and produced alliances between Iranian youths and progressive Americans. Losing Hearts and Minds is a narrative rife with historical ironies. Because of its superpower competition with the USSR, the U.S. government worked with nongovernmental organizations to create the means for Iranians to train and study in the United States. The stated goal of this initiative was to establish a cultural foundation for the official relationship and to provide Shah Mohammad Reza Pahlavi with educated elites to administer an ambitious program of socioeconomic development. Despite these goals, Shannon locates the incubation of at least one possible version of the Iranian Revolution on American college campuses, which provided a space for a large and vocal community of dissident Iranian students to organize against the Pahlavi regime and earn the support of empathetic Americans. Together they rejected the Shah’s authoritarian model of development and called for civil and political rights in Iran, giving unwitting support to the rise of the Islamic Republic of Iran.

“International education is almost always worth supporting because it can promote American interests and global dialogue in a way that very few endeavors can. But for international education to be an effective tool of public diplomacy, educational initiatives have to align with the military, political and economic dimensions of the larger strategy,” said Shannon. “In other words, the various “tracks” of a strategic framework need to be aligned. In the case of Cold War-era Iran, it was counterproductive for the United States to lend tremendous amounts of military support to the Shah, a leader who ruled for nearly four decades in a dictatorial manner.”

Losing Hearts and Minds: American-Iranian Relations and International Education during the Cold War is available at the Emory Mercantile & Bookstore and online at Amazon.

Shannon is currently working on a collaborative book with Mass Communications professor, Mark Finney, about how liberal arts institutions approach the subject of 9/11 and its impact.

The lens of international education integrates various sub-fields of history that are not always in conversation with the other, which in turn produces a richer picture of the past.
-Matthew Shannon