Posted March 30, 2019
President Jake B. Schrum’s plans to retire are accepted by the Board of Trustees, while the Board unanimously approves to promote Provost Dr. John W. Wells as its 22nd President. 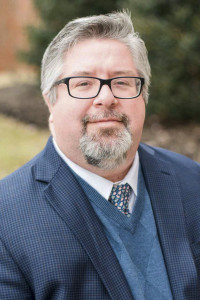 A changing of the guard will soon take place at Emory & Henry College when Jake B. Schrum retires from his six-year presidency post that he assumed on August 1, 2013. Schrum shared his plans early with the Board of Trustees so they could plan for a smooth transition in leadership. At the March 30 meeting held at the College, it was recommended by the Executive Committee of the Board to name current Provost and Chief Academic Officer Dr. John W. Wells to be the 22nd president of Emory & Henry. The vote by the full board was unanimously approved. Wells will assume the role beginning July 1, 2019.
“The community of Emory & Henry is grateful for the contributions brought to the campus by Jake. During his search for the next Provost, he had in mind that this person could be his successor and was very selective with his recommendation over a year ago,” said Kyra Bishop, ’77, chair of the Board of Trustees. “The Board reviewed the accomplishments of John and his contributions to E&H as well as thoroughly interviewed him through a sub-committee of trustees,” said Bishop. In addition, the faculty led the Provost search understanding the need to cover presidential responsibilities as needed.
During Schrum’s tenure, enrollment increased with the launch of the School of Health Sciences in Marion, Va.; the McGlothlin Center for the Arts was completed, the Ampersand Center was opened and integrated learning was added to the core curriculum to promote project-based learning; the Intermont Equestrian Center at E&H was acquired and it collected more national titles; the largest comprehensive fundraising campaign in the history of the College at $80 million has progressed toward its goal; the new Village housing and community center were constructed; and a refinance of our long-term debt with USDA at historically low interest rates was completed. He and his wife Jane were most gracious ambassadors of the College and introduced E&H to a new and national audience.
Schrum will be named as a Senior Fellow to aid with the transitional planning and continue campaign efforts as well as those started with Ampersand Center and Institute. He plans to retire in Atlanta, Ga., with his wife Jane. They have two adult daughters.
Wells began his post as Provost Chief Academic Officer at Emory & Henry in May of 2017 and went to work immediately executing the budget and growth plans set forth by the Board in the summer of 2017. “His ability to interpret and understand strategic goal planning has been helpful to the campus community,” said Bishop. “We are fortunate to have someone within our organization, grounded in the liberal arts, vetted by the faculty for his position as Provost, who can step into the Presidency and move immediately forward on our ‘Pivot to the Future’ strategic three year plan.”
Prior to coming to Emory & Henry, Wells served seven years as the Executive Vice President and Chief Academic Officer at Mars Hill University in NC creating new programs in both professional and traditional liberal arts and increasing enrollment by 30 percent in four years. Prior to that he served as Provost and Interim College President for four years at Young Harris College in GA; and was a professor and dean of social sciences at Carson-Newman University in TN, where he earned his undergraduate degree in history. He has a master’s degree and doctorate degree in political science from The University of Tennessee from 1993 and 1996 respectively. Wells and his wife Shannon Earle, who serves as the Chief of Staff for the Chancellor at UNC Asheville, have two young adult children, Molly and Garland.
“John is a pleasure to work with and will bring about significant and meaningful change at Emory & Henry College,” said Schrum. “He’s a leader with integrity, sound management principles, appreciates collaboration and autonomy. He values the role of faculty in the academy and understands the concerns of access and affordability for many students and their families in this region and beyond. His goal is to ensure students have a solid return on their education from Emory & Henry and can easily transition to the world of work or continued education.”

“John is a pleasure to work with and will bring about significant and meaningful change at Emory & Henry College,” said Jake at the Board meeting. “He’s a leader with integrity, sound management principles and appreciates collaboration and autonomy. He values the role of faculty in the academy and understands the concerns of access and affordability for many students and their families in this region and beyond. His goal is to ensure students have a solid return on their education from Emory & Henry and can easily transition to the world of work or continue their education.”