Posted June 21, 2019
June is Pride Month at Emory & Henry College! Travis Proffitt and the Inclusion & Dialogue Center have been working hard to provide a safe and inclusive environment on campus for all students.

As many know, June is National Pride Month, celebrating LGBTQ+ persons and honoring the Stonewall Riots that occurred at the end of June, 1969. This year marks the 50th anniversary of the Stonewall Riots, which were the result of police crackdowns on gay and lesbian bars and nightclubs in New York City for operating without liquor licenses. Because the state of New York would not give liquor licenses to bars that served gay people, these places had to operate illegally. On the night of June 27, 1969, a police raid on the Stonewall Inn in the Village of New York City sparked a six day protest where protesters were met with police violence. On June 2, 2000, President Bill Clinton declared June “Gay & Lesbian Pride Month”, and many pride events take place in this month to honor the impact of the Stonewall Riots and LGBTQ+ persons’ impact on the world. 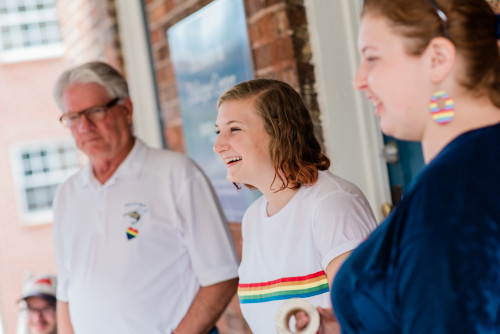 Students gather with President Jake Schrum for TriPride activities on campus outside the Inclusion & Dialogue Center.In September 2018, TriPride held their first Pride parade and festival in Founders Park, Johnson City, Tenn. Over 10,000 people gathered for the festivities, and among those in the crowd were members of the Emory & Henry community. Travis Proffitt, director of academic diversity initiatives at the College, had a role in getting those students and employees to the parade. “Participation in last year’s TriPride parade was important. It was important to celebrate the unique and diverse identities of our students and employees and to do so in such a joyful and community-minded setting like a pride festival. It was important that we, as members of the Tri-Cities and Appalachian region, show up and be a part of an event that disrupts a lot of the narratives about what it means to be Appalachian,” Proffitt said. “So often, this region is portrayed as backward and intolerant, but events like TriPride show that Appalachia is a diverse place with countless citizens who are affirming and inclusive.”

Since 2017, the Inclusion & Dialogue Center at Emory & Henry has made strides towards a more inclusive campus for all students and employees, regardless of race, gender identity or expression, sexual orientation, ethnicity, socioeconomic status, religion, ability, and other salient identities that any member of the community may hold. Over the past year alone, the Center has conducted numerous SafeZone Trainings, including one recently to nearly 50 faculty members from over 30 institutions across the Appalachian region. SafeZone Trainings allow for conversations on sexual orientation and gender identity, and encourage safe and inclusive environments. They hosted Carter Sickles, noted transgender writer and scholar, who spoke on his experiences of transitioning while still living in Appalachia. The Center conducted a faculty reading group where they read the book Trans* in College: Transgender Students’ Strategies for Navigating Campus Life and the Institutional Politics of Inclusion by Z. Nicolazzo, assistant professor of Trans* Studies in Education at the Center for the Study of Higher Education and a member of the Trans* Studies Initiative at the University of Arizona. The reading group established by the Inclusion & Dialogue Center was focused on how professors can be more inclusive of LGBTQ+ persons in their classrooms. The Inclusion & Dialogue Center has an active LGBTQ+ Student Union, and has recently begun an initiative working to allow students and employees more autonomy with providing preferred names and pronouns for college records. Thirteen LGBTQ+ graduating seniors were honored in the Lavender Ceremony this past May, hosted by the Inclusion & Dialogue Center. Lavender Ceremonies are a part of the year-end ceremonies associated with graduation, and seek to distinguish LGBTQ+ students for continuing and finishing their education despite any adversity they may have faced for being a minority.

“Emory & Henry College has made significant strides over the years to become a more inclusive learning, working and living environment for LGBTQ+ students and employees. There is a tremendous amount of work left to do, but the College is committed to affirming and welcoming people of diverse gender identities and expressions, and sexual orientations into the full life of this community,” Proffitt said. “Just as the wider world is a better and richer place because of the contributions of LGBTQ+ persons, so too is Emory & Henry.”

Just as the wider world is a better and richer place because of the contributions of LGBTQ+ persons, so too is Emory & Henry.
-Travis Proffitt