Posted July 01, 2019
John W. Wells began his tenure as E&H’s 22nd President on July 1, 2019. To celebrate his first day, Wells brought every department donuts to thank them for their service to Emory & Henry College.

Dr. John W. Wells has assumed the role of the 22nd president of Emory & Henry College beginning July 1, 2019. Wells has taken over following a successful presidency from Jake B. Schrum, who served as president since August, 2013. At the March 30 Board of Trustees meeting held at the College, it was recommended by the Executive Committee of the Board to name Wells, the then Provost and Chief Academic Officer, to serve as the 22nd president of the oldest private college in this region of Virginia. The vote by the full board was unanimously approved.

As a part of his first day on Monday, Wells made “donut runs” to a variety of offices and departments. Beginning at 7 a.m. with the facilities team, Wells brought fresh donuts and appreciation to everyone who works on campus. “He visited all the offices on campus, as well as making the journey to the School of Health Sciences in Marion and the Equine Center near Bristol,” said Mark Graham, Executive Assistant to the President & General Counsel. “He really wanted to be able to see everyone and thank them for all they do now and in the future.” 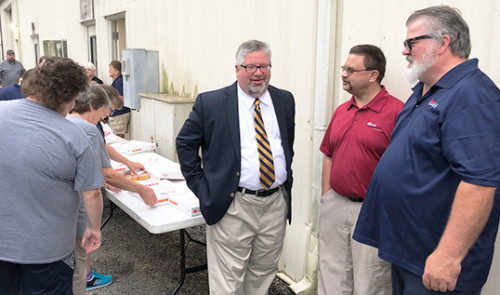 John Wells bringing donuts to the Facilities team on his first day as presidentPrior to coming to Emory & Henry, Wells served seven years as the Executive Vice President and Chief Academic Officer at Mars Hill University in NC creating new programs in both professional and traditional liberal arts and increasing enrollment by thirty percent in four years. Prior to that he served as Provost and Interim College President for four years at Young Harris College in GA; and was a professor and dean of social sciences at Carson-Newman University in TN, where he earned his undergraduate degree in history. He has a master’s degree and doctorate degree in political science from The University of Tennessee from 1993 and 1996 respectively. Wells and his wife Shannon Earle, who serves as the Chief of Staff for the Chancellor at UNC Asheville, have two children, Molly and Garland.

“John is a pleasure to work with and will bring about significant and meaningful change at Emory & Henry College,” said Schrum. “He’s a leader with integrity, sound management principles, appreciates collaboration and autonomy. He values the role of faculty in the academy and understands the concerns of access and affordability for many students and their families in this region and beyond. His goal is to ensure students have a solid return on their education from Emory & Henry and can easily transition to the world of work or continued education.”

He really wanted to be able to see everyone and thank them for all they do now and in the future.
-Mark Graham