Visitors from Copey, Costa Rica Have Fun with Summer Scholars

Posted July 18, 2019
Jimena Monge-Cordero, Dayana Rivera and Mariana Rodríguez got a chance to participate in Summer Scholars through a partnership with the Friends of Nature Copey Learning Center and alumnus Scrapper Broady (’70).

Jimena Monge-Cordero, Dayana Rivera and Mariana Rodríguez are three special young women who visited Emory & Henry for the Summer Scholars Institute & Leadership Program as a part of the Friends of Nature Copey Learning Center, based in Copey, Costa Rica.

The young women arrived in Southwest Virginia on June 13 following a twelve-hour flight, and were greeted with a reception hosted by George Whitley and other Friends of Copey. “Coming here was sort of shocking because of the difference in culture,” Dayana said. “Eating times are very different, the roads and the surroundings of Virginia are also different, but in a good way!” 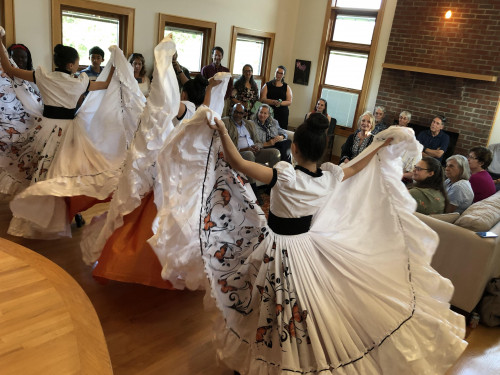 Dayana Rivera, Jimena Monge, Mariana Rodríguez and their chaperone, Catalina Cortés, shared a dance with College administrators, faculty and friends of the program during a dinner in their honor, provided by George Whitley (’77). Arriving a few days before the start of Summer Scholars, the young women had time to explore the region. They went hiking, shopping in Bristol and hopping around at Just Jump. Once Summer Scholars began on Sunday, June 16, they got to explore all the various topics the camp has to offer. “I’ve gotten to take yoga and zumba classes. I think those were some of my favorites,” Mariana mentioned. “The theatre class I’ve been taking all week has been special. It has taught me the importance of connecting to others and how important that is for communicating.”

Jimena, Dayana, and Mariana finished Summer Scholars on Friday, June 22. “Making friends has been my favorite part of this trip,” Jimena said. “I am grateful to have met everyone I did and I’m going to miss them.”

The Friends of Nature Copey Learning Center was established as a non-profit educational center dedicated to promoting social development through the learning of English as a Second Language. They offer programs to community members of all ages in the areas of environmental education and cultural development in order to foster social sustainability. Emory & Henry’s International Education program and Scrapper Broady (’70) are bringing teachers to the center in Costa Rica to help with their English as a Second Language program.

I am grateful to have met everyone I did and I’m going to miss them.
-Jimena Monge-Cordero