Ryan Hasty works at Makani Power, a wind energy R&D project that was spun off from Google’s 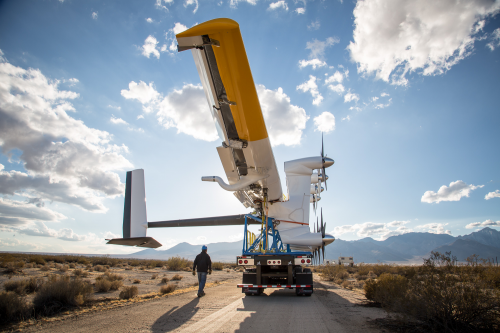 A photo of Ryan Hasty's flight project at Makani Power.secretive research division known as X. “We are developing an airborne energy kite technology that integrates advances in aerospace engineering, materials science, and autonomous controls. As a prototype engineer on a small team, my objectives range from flight hardware integration to prototype design and flight testing.”

He says what he loves most about the work is “the amalgamation of advanced aerospace concepts with experimental clean energy. The evidence of anthropogenic climate change is clear and unequivocal. Our decisions from here forward with respect to energy production will have a significant impact on future life on earth. This project is one of many new energy technologies aimed at pushing the limits of what we know to be possible.”

He says research and development work is challenging by definition – the whole idea is to try something that has never been done before. But therein also lies R&D’s greatest excitement.  “Exploration and creativity speak to something innate and instinctive within us as humans, and the highest expression of these instincts are the things or ideas we bring into the world.”

Ryan studied Chemistry and Environmental Studies at Emory & Henry. He says he is, of course, benefiting from the technical aspects he learned from his major study areas, but he especially values the opportunities Emory & Henry gave him to ask the ethical questions behind science and technological development. “It’s not enough to ask ourselves whether we can build something, we must seriously ask whether or not we should. These questions are critical to our future with the rapid progression of aerospace technologies, robotics and artificial intelligence.”

When he’s not creating and molding new ideas, he can be found serving as a mentor to several local high school F.I.R.S.T Robotics Teams and can be found building combat robots for ABC’s ‘Battlebots.” He is also a dedicated practitioner of Brazilian Jiu Jitsu and supports homeless rights efforts in the Bay Area.

“It’s not enough to ask ourselves whether we can build something, we must seriously ask whether or not we should. These questions are critical to our future with the rapid progression of aerospace technologies, robotics and artificial intelligence.”