Katelyn Shaver’s “world of work” gives her a job description that covers a lot of areas:

-Dressing in period outfits and acting like a person from the 1830s.

-Public Speaking: Educating about history, lifeways, and skills from the 19th Century.

-Biology: Working with the prairie/marsh restoration and wildlife.

-Transportation: Driving different types of vehicles and us various tools.

-Public Relations: I usually get asked to help with traffic control.

As a Park Ranger I – Interpretation/Volunteer Coordinator at San Jacinto Battleground/Battleship TEXAS State Historic Site, Katelyn’s job description could probably be summed up by this single quote: “It is not an experience I expected to have but there we are.”

Katelyn became passionate about the world of park interpreters after working a stint at the Petersburg National Battlefield site. She is now in one of the country’s most unique parks, far from Petersburg, because she understood that to get a job or a promotion in the National Park Service, she had to be willing to move.

Katelyn double-majored in English, with a focus on creative writing and literature, and History and minored in Sociology. . She took classes in psychology, biology, and anthropology.  She’s now in a job that requires her to use a wide range of skills and experiences. “I had some good history professors at EHC that helped grow my interest in the field. Every NPS site is unique and so the requirements for jobs at them differ; we ‘wear many hats’ in my profession and so the skills I learned from different subjects have proved to be useful in the long run.” 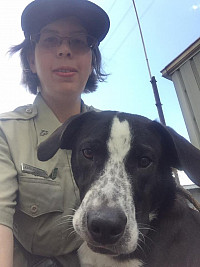 You’ll see a lot of articles these days about how people don’t appreciate the value of a liberal arts degree. The “connected learning” experience offered by places like Emory & Henry might seem like it isn’t getting you to your job goal fast enough. Katelyn Shaver is a perfect example of why having a broad range of skills and experiences can prepare you for what you don’t see coming.

She just celebrated her five-year work anniversary, and she is well-versed in the fascinating history of her park. Fun fact: this park site is considered the birthplace of Texas because the last battle of the Texas Revolution occurred here on April 21st, 1836: the same year Emory & Henry was founded.

“…we ‘wear many hats’ in my profession and so the skills I learned from different subjects have proved to be useful in the long run.”