Class of 2010 Written by Monica Hoel

Laura Holley Thomas is a long way from fashion magazines.

Laura (E&H ’10) majored in art and minored in environmental studies, and she’s finding the two disciplines to be a perfect match for the work she’s doing: a special 4-year long project that has her planning, researching, writing and designing trailhead and wayside exhibits for the entirety of Theodore Roosevelt National Park in North Dakota – all 110 square miles. “I’m using art, design, and the written word to communicate information about plants, animals, human culture, climate change, habitats, ecosystems, etc. Though, had I known there was more to graphic design than making fashion magazines (I kid you not. That’s what I really thought.) I might have taken more classes focused on digital art.”

Laura has been with the National Park Service for 5 years, all of which has been spent at Theodore Roosevelt. She began as a full-time volunteer (citing that volunteerism is something she saw emphasized at Emory & Henry). That led to several paid seasonal positions, and now to this current assignment. She says this is her dream job…“But, it’s temporary! So I’ll be moving on with another job or another project here or at another park. I’d like to make a career with the NPS, but gaining permanent status is difficult, so I’m keeping other options open.”

Her job experiences can’t be calculated within the confines of a resume. “Often I’ll get called away from my desk to help with whatever is going on in the park. We have a really small staff, so we all pitch in. I’ve helped return escaped bison to the park, assisted with elk reduction efforts, helped at bison roundups, helped with a prescribed burn, illustrated our new junior ranger book, led bird counts, helped plan our annual astronomy festival, done on-camera interviews with the media, gone on search and rescues, and so much more.”

And her current project to develop signage is more than busy work: it feeds into her core beliefs about the importance of National Parks. “My biggest concern is that the NPS will become irrelevant. We have to inspire each next generation to care for and about our American landscape and its history or we risk losing our relevancy. But staying relevant shouldn’t be difficult. Our parks speak for themselves. I’ve watched people look up and see the Milky Way for the first time. It’s something they (and I) will never forget. And they’ll remember that the clearest, darkest, most uninhibited sky they’ve ever seen was above a national park and they’ll understand why we protect this place. We just have to get people into their parks and make sure their experiences are meaningful and memorable. That’s what this signage project is all about. Hopefully the exhibits I create will inspire visitors to connect intellectually and emotionally with the park and its resources and turn those personal connections into active stewardship of this place and the public lands in their own communities.”

Laura’s experiences have run the gamut from wildlife management to designing websites and social media content. She even designed a special pictorial postmark to commemorate this year’s National Park Centennial (an honor stamp aficionados can appreciate). And she admits that some of the skills she’s using now were learned in E&H classes she didn’t think were all that important. “In my first few seasons as a ranger I was writing and presenting interpretive programs (tours, guided hikes, campfire talks, etc.). I leaned heavily on what I learned in speech class which I would absolutely never have signed up for had it not been mandatory!”

If you find yourself in Theodore Roosevelt National Park, look for Ranger Laura…and certainly, look for her signs. 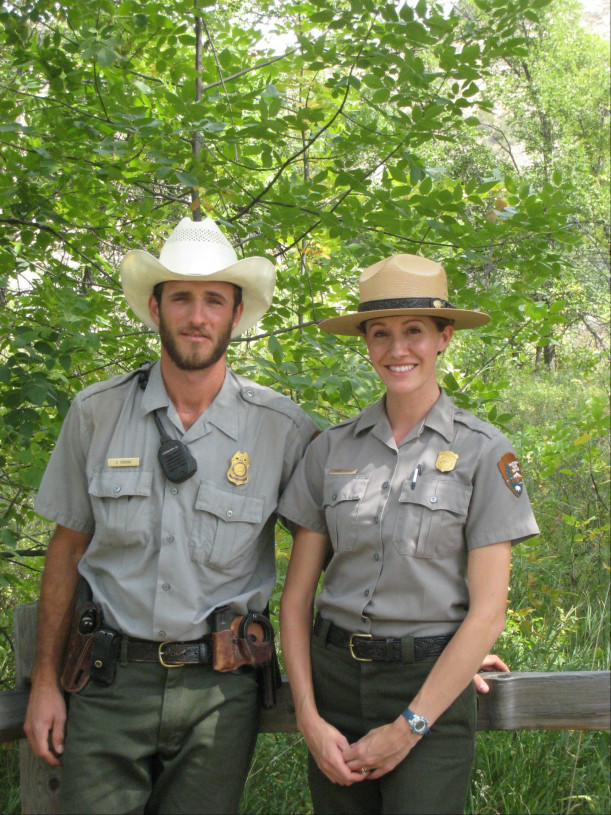 Photo, left: Laura Holley Thomas is shown here with her husband, Shawn, who is no longer a ranger, but is now a deputy.

“In my first few seasons as a ranger … I leaned heavily on what I learned in speech class which I would absolutely never have signed up for had it not been mandatory!”